The Wild Grinders stream a webcast featuring 24-hour coverage of all things Grinder. Denise, angry that her channel isn't getting any hits, starts sabotaging the Grinders' tricks for her Epic Fail Live Feed. It's action cam vs sister cam as Lil Rob tries to pull off The Lil Rob Challenge without Denise messing him up. In the end, Denise's efforts to embarrass Lil Rob result in her accidentally pulling off the big skate trick herself, in the worst way possible, live on the Wild Grinders' webcast.

Upset and angry that her video does not have any views in her page, Denise recognizes that the Grinders' video receives more views and more comments than hers. Goggles invented the Grinder-prototype web cams that can locate on the top of the Grinders' helmets. Denise, devoured by anger and jealousy, blurts out some scornful comments against the Internet viewers and the Grinders, who dislike her video. She attempted to destroy the Grinders' reputation in order for herself to be more superior than the Grinders on live; but in her dismay, she humiliated herself by slipping off the skateboard, and fell to the garbage can. It was all thanks to the Grinders' live feed, receiving over 1 million views.

The Grinders have other ideas to pass through Denise's fame with Goggles' Accelerator 5000 and Meaty's T-rex, but these attempts failed. Lil Rob figured it out by using his Grinder cam, creating his most challenging event: The Big Lil Rob Challenge. Denise hacks through Rob's web cam, interrupting his video and confronting that Lil Rob will fail for the last time. 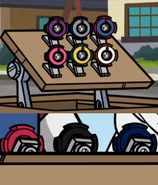 The two frames with before and after Emo's web cam disappearance

The train for Jack Knife's error is quite difficult to catch.

The dino's stomp made Emo and Jack lose their cams!
Add a photo to this gallery
Retrieved from "https://wildgrinders.fandom.com/wiki/Web_Wars?oldid=7966"
Community content is available under CC-BY-SA unless otherwise noted.