The Prince & the Skateboarder (ampersand used in title card, stylized The Prince and the Skateboarder in TV guides) is the first half of the fourth episode of the Wild Grinders series. This episode focuses on Jack Knife and his royal clone, Prince Xavier swapped places in order to obtain the Queen of Moronico's instructions and submit to be in the Royal Skateboarding Tournament.

Playing a game, Jack Knife uses a backward stance, but without looking, he receives a concussion on the back by the limousine. The Grinders are interrupted by Stubford and Officer Lacowski, crossing the "loser" zone, as the Royal Skate Tournament is held. Then a wealthy group comes out of the limousine, as it stands by a young man with his face hidden by his mother, the Queen of Moronico. The prince retrieves the "royal" padding from Butler Jankins and the crew, as the prince somewhat reveals his appearance, but his face (except for his eyes) are covered with his material. After the butler slightly pushes the prince forward, the prince rolls down on a straight slope of the sidewalk panicking. Lil Rob, Goggles, and Jack Knife saves the prince from the fall, as Jack Knife was stuck by the prince. Goggles helped the both of them, as he presses a red button from the prince's crown. The prince reveals to be a clone of Jack Knife, right when Jack Knife shocks into a surprise. The prince is known to be Prince Xavier, as he describes Jack Knife's appearance and habits. Xavier starts to hear Butler Jankins's voice; right then, the Grinders make up a plan to hide the prince, and set Jack Knife into Xavier's disguise. The Prince runs off freely and joyfully, but was able to pain himself when a trash can is outside of him (by the fault of Goggles).

Meanwhile, Lil Rob, Jack Knife, and Meaty arrived at the mansion, as they start the food, but Jankins becomes stubborn as he he uses this remote to unleash an octopus underground. Lil Rob was later imprisoned by the queen, when she realizes that skateboarders are highly dangerous (before that, Rob flirts on Aisha, the Princess of Moronico).

At the park, Xavier, disguised as Jack Knife, taunts Flipz that she is realized to be weak, but she improves herself to taunt Xavier, that he fail numerous of times.

After Jankins failed to skate and injures himself, he is going to visit to the hospital, before Lil Rob and Jack Knife receive a message from Goggles. Goggles insisted that Xavier depressed them, as it comes by Flipz, which she doesn't remember why Xavier is on disguise. Rob and Jack decide to return to Sprawl City, as Jack Knife figures out an escape plan, which unfortunately being attacked by the octopus.

Lil Rob and Jack Knife finally locate the skating arena, but Stubford insults the both of them, before he and Lackey are attacked by the octopus. Prince Xavier passes by to a very large ramp, to entertain the audience, but fails sarcastically, claiming a false victory. Jack Knife then shows up to take Xavier's place. After this, Lil Rob proclaims to the queen that a person may have the skills to skate, but miserably, the queen declines his statement, as she kicked the Grinders out of the arena, then headed home to Morinico with Aisha, and mistakenly, Jack Knife. Xavier is running at the road, gleefully being free from his family. 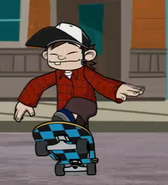 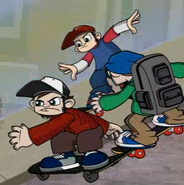 What wrong with blue wheels?
Add a photo to this gallery
Retrieved from "https://wildgrinders.fandom.com/wiki/The_Prince_%26_the_Skateboarder?oldid=8160"
Community content is available under CC-BY-SA unless otherwise noted.