A nameless horse, also known as "Jasper" by Denise and "Butterfly" by Stubford Hucksterball, is one of the minor antagonists of the Wild Grinders series.

The horse has been adopted by Denise, pretending to be a unicorn. He is hiding his true feelings from the Dyrdek family, except for Lil Rob and Meaty, whom he have sabotaged and wanted him to be banished. The horse may cause a jinx to Meaty, such as destroying the Dyrdek family's dog border plates. When Denise is not around, he can speak and becomes anthropomorphic to Rob and Meaty. However, Denise caught the horse's sinister chuckle, and she attempts to banish him, which he is now with Stubford and Officer Lacowski, pretending to be Butterfly. He currently causes trouble to Lackey as well.

Part of the episode, the horse is not so talented of skateboarding.

The horse is pictured to be a white horse with a yellow mane and tail and light blue eyes. He does have a lavender-colored saddle on his back. As Jasper, he has a horn on his head, but is sadly removed by Denise, which we would noticed that it was fake. As Butterfly in the episode's conclusion, he gains a pair of (fake) orange butterfly wings and antennae.

The horse also makes brief appearances, but has a larger body size. He is now a real unicorn, but his belly gets a bit large and has no saddle. It is also just an imagination of Denise and Squeak, in Emo's Mystery Girl. He also appears in Grindbox 1080, but his mane is slightly longer inside of the game. 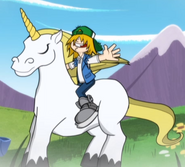