Spitball is one of the main characters of the Wild Grinders.

Latino-American Spitball is the youngest of the crew, portrayed as very patient and sometimes quiet by most events. Having an ability to do martial arts, such as "Ninjutsu", he stealthly lurks into action without alarm. He can be described as a "Tijuana Street Ninja" (somewhat "street ninja" in the TV series). Despite Spitball's punkish appearance, he speaks formally.

In Grindermania, his musical instrument is the bass.

Once presented in The Secret Life of Spitball, Spitball is pictured to have an untold mystery, as the Grinders have no chance to sucessfully leak his secrets. Spitball's true nature is that he is among popularity around Sprawl City, such as battling dangerous creatures and robots, and being a celebrity.

Spitball is bilingual, both Spanish on online episodes and English in TV episodes, although these are yet to be combined.

Spitball prefers to skate "any thing that was big", and his stance is goofy. He prefers his music as "Power Chords & Double Bass Pedal rock".

Spitball's relatives are certified as unknown. He has a father, older sister, and brother mentioned.

Before Spitball becomes a Wild Grinder, as told in Search for Master Sensei, Spitball met Master Sensei and Fong Say Yuck, when they are fighting for Spitball. After the battle (possibly unseen), Spitball was chosen as the "Street Ninja" by Master Sensei, which Fong was angered that he will take revenge. Now then, he gains the ability to perform a mixture of karate and ninjutsu, or in slang term, "Street ninjutsu".

Spitball wears a blue bandanna with patterns that matches his wristbands. He also wears a black shirt with a skull on the center. He wears 80% grey pants with the left side torn above the knee, and wears black shoes with pink zig-zags on the tips. Also, the chains are attached to Spitball's pants. His hair is black, long, and shaggy. Spitball mainly wears his sunglasses, but his eyes can sometimes be squinted when taking his sunglasses off.

In The Amaaaazing Adventures of Captain Grindstar, Spitball appears to have a black ninja suit. His hair is tied in an upper ponytail. This outfit can take cameos in Search for Master Sensei and Grindstar Returns.

When Lil Rob travels to another dimension in A World Gone Rad-Awesome, Spitball has his opposite self as "too sociable" at once. His skull icon was removed from his shirt, especially the chains from his pants. When combining by Jack Knife in an unbalanced time, it takes Jack Knife's head and Spitball's full body, with his sunglasses and bandanna.

Spitball gains his next disguise in Hoopz Dreamz, with a yellow-purple Hucksterball jersey that contains a "43" on the bottom, shorts, wristbands and shoes (recently the same shoe patterns as his original shoes). He has a walnut-colored afro wig and mustache.

Spitball jumps between the orange-white rail and a small set of stairs, holding his skateboard free-handed. 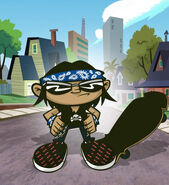 Spitball's default profile image
Add a photo to this gallery

Spitball in "Wild in the Streets"

Spitball injured his teeth in "Concrete".

"Did you know the hard shell taco was first described in 1949, but soft shell tacos have been eaten in Mexico for 500 years?" 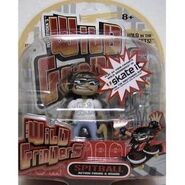 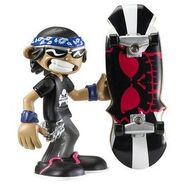 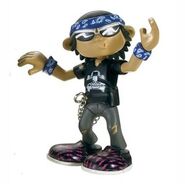 "Whao!" expression of a Spitball figure 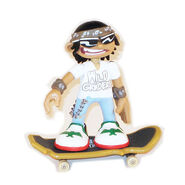 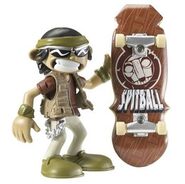 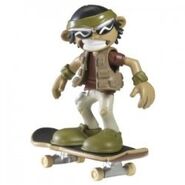