"If I can't even skate, then no one will. (EVIL CACKLING)"
―Denise, as the Wicked Witch of Ollie

The episode begins with a very windy weather outside Lil Rob's house, when Rob and Meaty are preparing a dangerous trick on a tall ramp. However, Lil Rob thinks the ramp could be a little bit bigger, then Jay Jay says if he wants a bigger ramp, he's on his own. The wind strongly blows the hammer and hits Jack Knife's face. Goggles predicted that the wind conditions are high for trying out the ramp. But, Lil Rob is determined to test the ramp. Meanwhile, Denise is spying on Freddy to take his lunch break, but Lil Rob's face blocked Denise's view in her binoculars. Denise scolded him about the giant ramp blocking her view of Freddy. Lil Rob apologizes to Denise about the ramp, but he have to sacrifice everything to ride the ramp. Finally, Lil Rob and Meaty made it to the top of the ramp, but the weather conditions are worst than before. The two skaters skated down the ramp and into the air. Then, they discovered a tornado, which send them spinning around in a strange condition.

Lil Rob and Meaty skated out of the tornado, and landed into a mystical area. Lil Rob gets interrupted when he sees that this world was different. Googla the Good appeared and explains that they're in the Land of Ollie; Googla gives instructions to Rob that he have to grind the Yellow Brick Rail to see the Wizard of Ollie to go back home. So, Googla summons the ruby wheels onto Lil Rob's skateboard, and he and Meaty skates off to see the wizard. Googla forgets to tell them that the Wicked Denise of the West will stop them at all costs. The two Grinders skated through the Land of Ollie, and meet the Scarecrow (Jack Knife, missing his wheels), the Tin Man (Jay Jay, missing his shoes), and the Cowardly Lion (Emo Crys, missing his talent of skating). So, they allied Lil Rob and Meaty to see the wizard. Suddendly, The Wicked Denise of the West watches over them to the them from seeing the wizard, so she sends the flying monkeys to grab the ruby wheels.

They met a talking tree (Spitball), who was warning them about the wicked witch's castle. The flying monkeys began to steal Lil Rob's skateboard, but the Scarecrow and Meaty tried to stop them, but the Scarecrow's legs were ripped apart.

They visit at the skate park, and the Wizard of Ollie flashes in front of them. They discoverd that the Wizard is really a fake. The Grinders finally get what they deserved, and Lil Rob gets his ruby wheels back. But, they wanted to go home, instead Lil Rob and Meaty were splashed with cold water, and they wake up Stubford's mansion. Rob stated that it is likely a dream. The episode ends with the ruby red wheels, still on Lil Rob's skateboard. 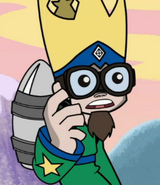 I know...Tracy just draws you without fingernails.

Rawr! Sorry, Rob, but I've got to borrow this for a quick second.
Add a photo to this gallery
Retrieved from "https://wildgrinders.fandom.com/wiki/Skaterz_of_Ollie?oldid=8101"
Community content is available under CC-BY-SA unless otherwise noted.