Shark Attack is one of the minor characters of the Wild Grinders series.

Shark Attack is portrayed as a radical and energetic teenager, but has a cowardly side inside him. Approval from the beginning, His negative personality trait is that he lies to everyone about his adventures. This goes to the examples about the scar that he had by the lattice fence at the pier, instead of a Great White shark; and not riding on Neptune's Chowder.

Shark Attack's father, who runs a surfboard shop at the Sprawl City beach. Like his son, he also lies.

Shark Attack appears to have tan skin, light blue eyes, and yellow long hair. His attire consists of a cerulean Hawaiian shirt and brown shorts. Shark Attack wears white shoes at the end. On his right wrist is a zig-zag permanent scar that reaches to part of his arm. 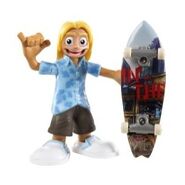