Lil Rob, regularly named as Robert by his parents, is the main protagonist and the leader of the Wild Grinders. He is based on the professional reality star and producer, Rob Dyrdek.

From the old Wild Grinders site:
Lil Rob was born in Ketterville. He bought his first skateboard from his sister's boyfriend, the leader of the Street Rats skate crew. Lil Rob wanted to be a Street Rat, and he practiced skateboarding every day. But Lil Rob was too young for that crew. As time passed, Lil Rob grew into a local shredder of the streets of Ketterville and he made lots of new skate homies along the way. With his new friends Lil Rob started his own skate crew, the WILD GRINDERS!

Lil Rob, the leader of the Wild Grinders, have an upbeat personality, street smarts, and wacky imagination. He is also a jokester towards his family and some of his friends, but he is loyal to all. His negative trait is that Rob is ignorant from the smallest things that could lead to bigger events of the story. He infinitely never surrender to beat-ups and challenges, old and new.

Lil Rob's Gnarly Craft usertag is Sir Grinder Boardslide, but it was terminated when Lil Rob is inside of Gnarly Craft.

Lil Rob's stance is goofy, and he prefers to skate on ledges, bumps, and rails. Older information include that he enjoys "anything with ENERGY… from Rock to Hip Hop"

As told in Swaggerless, Meaty proclaims his and Lil Rob history how they become friends in childhood. When Stubford arrives by both of them meanly, his juice was spilled on his machine, then crashed to Meaty. Lil Rob saves Meaty, and led Stubford, which he will be his villain "forever".

Lil Rob wears a blue shirt with sleeves attached. He also wears a red cap, but uses his red cap-styled helmet when skating. His skateboard was based on a alien logo that the real Rob Dyrdek have owned.

Lil Rob's clothing design is later re-modified in a Halloween inspiration, such as orange and black colors, and a scary-faced pumpkin icon on the center. This is only used in the teaser of Texas Skateboard Horrorland Zombie Activity 3.

In Neptune's Chowder, Lil Rob wears a blue-indigo colored surfing suit. Unlike the other Grinders, except for Goggles, Meaty, and Jack Knife, Lil' Rob's surfboard is light blue.

In Lil Red Riding Rob, Rob wears a red shirt with a hood that can be visible in one episode. This is the temporary appearance in this episode.

In Grindermania, Rob wears an indigo jacket and a red shirt inside. He keeps his red cap, but used it backwards. This is the temporary appearance in this episode.

When Rob travels to another dimension with a portal in A World Gone Rad-Awesome, Rob's opposite form was even Stubford's merchant, and was more stupid as Officer Lackowski. The opposite form wears a white shirt with a red small tie and a blue vest attached. he also wears the same red cap and shoes as the original Lil Rob wears, and wears blue pull-up slacks. This is the temporary appearance in this episode.

Unlike Lil Rob's appearance in the TV series, the toyline presents Rob's hat and shirt, printed as "Wild Grinders" in cursive. Another toyline product shows that he has a serious face. On the gold edition, Rob's original outfit was changed into gold.

The second appearance shows Lil Rob, wearing a red shirt that a "WG" was printed on the lower right on his shirt and wears blue tennis shoes. He has a white hat with another "WG" logo printed in blue.

Along with Beefy (not yet introduced in the series), the third appearance shows Lil Rob with black sleeves and white "Wild Grinders" print on the shirt and cap. He also wears red-white tennis shoes.

Lil Rob's father. He can call his dad by his first name.

Lil Rob's mother. He can call his mom by her first name.

Lil Rob's 15-year-old sister. She is a bossy type of relative and keeps an eye on Lil Rob. Lil Rob has a dislike of Denise when she is provoking him, for example: singing the "Fro-Yo Mama Frozen Yogurt" theme song, and letting Goggles unite with her by texting Lil Rob's negative consequences on his cell phone.

Lil Rob's pet bulldog, who is also a skater. 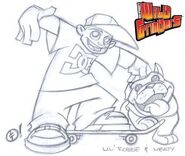 Lil' Rob skates off a ledge.

Lil Rob in his pajamas 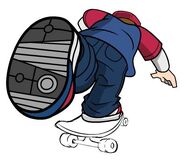 HPE wants to put a "DC" logo on Lil Rob's sole, but the network omitted this design, caused by copyright issues.

Rob's Scuba Suit
Add a photo to this gallery

Lil' Rob in "Wild in the Street"

Lil' Rob as he injured his teeth in concrete.

The Grinders are horrified.

Lil' Rob and Opposite Lil' Rob combined.
Add a photo to this gallery 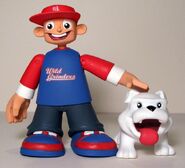 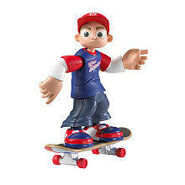 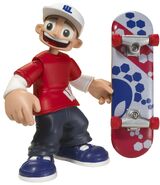 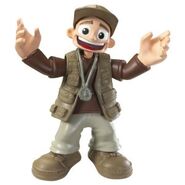 Lil Rob Figure as of The Lost Skate Spot 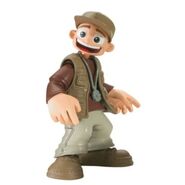 A collection of the first four WG toys in 2014. 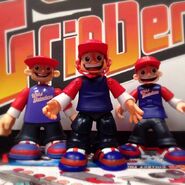