Jack Knife is one of the main characters of Wild Grinders.

Jack Knife is known for his lack of knowledge, and a resemblance into the Grinders' disappointment. After Jack Knife finishes his sentence, he ends with "man", as his speech was suggested to be talking to his friends, except for girls as he ends with "m'am". Jack Knife acts gullible infront of others, and commonly becomes a recent klutz.

In Grindermania, His musical instrument is the guitar, but Jack Knife plays it wrong as he wanted his guitar to sound like a saxophone. So he played it like a saxophone!

The official site claims that Jack Knife's stance is regular, and he prefers to skate on "anything and everything. As long he can skate it FAST!". His favorite music is "The more METAL the BETTER!", as of older information.

Rarely, Jack Knife almost look like a lumberjack, but was approved to be retro. He wears a red plaid shirt and brown shorts. He had a blue hat that can match up with his tennis shoes. Also, Jack Knife had a gap on his left side of his teeth that makes his tooth hang while closing his mouth. While going outside at the shore, he had his shirt taken off and wrapped it around his waist. Jack Knife's skateboard is blue with checkered patterns and yellow wheels.

In Lil Red Riding Rob, Jack Knife was formed as a Gingerbread Man.

When Lil Rob travels to another dimension in A World Gone Rad-Awesome, Jack Knife has his opposite self as savvy, genius, and nimble. He accessorizes himself with a yellow tie attached to his red plaid shirt. When combining by Spitball in an unbalanced time, it takes Jack Knife's head and Spitball's full body, with his sunglasses and bandanna.

In the second half of the Halloween special, Scream a Little Scream, it seems that Jack Knife is wearing a hockey mask; however, the plaids of Jack Knife's shirt was removed.

Dialoged by Jack Knife in Scream a Little Scream, her house reminds Jack Knife of his neighborhood. She is introduced as Jack Knife's younger sister.

Jack Knife has his royal look-alike to swap places to help him during the Royal Tournament Cup.

Jack Knife's idol whose true identity is unknown. Despite of being his idol, Crash held a spite and molested him usually.

Unlike Jack Knife's appearance in the television series, Jack Knife's hat was printed as "DEFCON" and can be shown on the wallpaper only. Instead of blue-checkered patterns on Jack Knife's skateboard, it have a yellow checker-pattern with a sky-blue section around the edges. The skateboard's wheels are blue instead of yellow.

Jack Knife's name is based on a type of pocket knife, a miniature weapon, or an exercise.

In the Brazillian adaption by Gloob, from Globostat, Jack Knife is named as Canivete. This Brazilian translation includes his original name, pocket knife, switch blade, clasp-knife, pen knife, and basically a knife.

Jack Knife holds on an edge on a ramp. 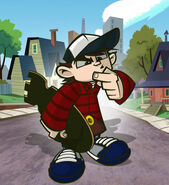 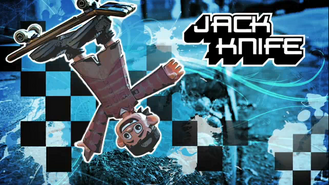 Jack Knife in "Wild in the Street" 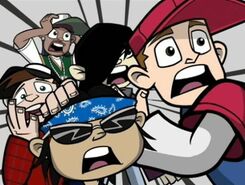 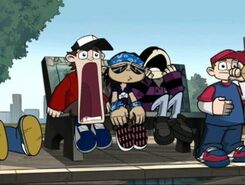 Jack Knife with his jaws dropped. 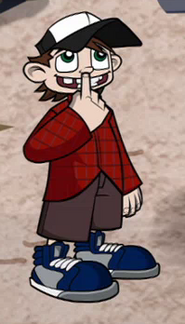 Jack Knife as he was picking his nose. 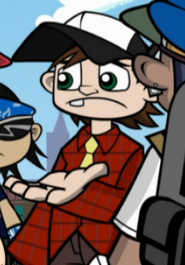 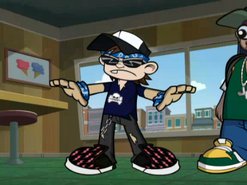 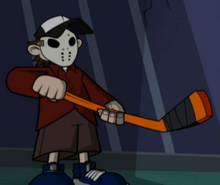 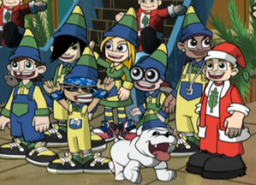 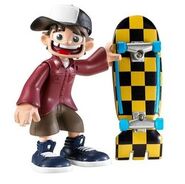 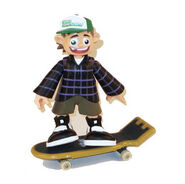 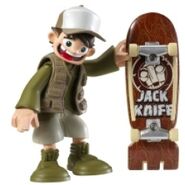