Goggles polishes and upgrades his camera with a large, electric adapter so he can record Lil Rob in the highest graphics he could get. Commanded by Goggles to bring him more power, Meaty licked the adapter, but it electrocutes Goggles, and then Lil Rob, but was given faster speed. Aside from the disastrous effects, the footage is a success, but there is one problem: Goggles' camera lens is still on his camera.

At home, the crew submit their video to the internet. One hit pops up, before numerous of hits rapidly increase. Track Hucksterball enters, and wants Lil Rob to be the actor of the movie and Goggles to be the director.

Lil Rob and the Grinders practice for Track's movie. While on their break, Jay Jay presents a new movie to the crew, sans Goggles and Jack Knife. Goggles comes back to the Grinders, but is an aggressively changed person, with Jack Knife as his assistant. Teasing Lil Rob with his strong commotion (he did not do anything after he yelled "Cut!" in one second), Goggles fires him on purpose, replacing him with Lil Rob imposters; and throwing him and the others out of the set. Emo Crys shares his plan to make the Grinders' own video without the help from Track Hucksterball and the recently changed Goggles.

Track Hucksterball fires Goggles for his lack of time, replacing him with his imposters, similar to the ones who replaced Rob. Goggles, into his normal self, apologizes to his friends for betraying them as a selfish "prima-donna". Lil Rob scooted off to humiliate Track's set, before Goggles consulted Track that he will bring the Grinders back to the film. The Grinders made it to the Hollywood premiere role, with Track as their assistant. 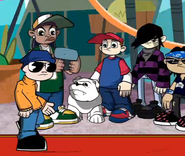 Emo's eye is pushed close to his nose. 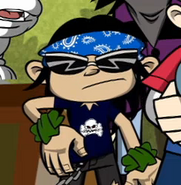 Spitball's green wristbands
Add a photo to this gallery
Retrieved from "https://wildgrinders.fandom.com/wiki/Going_Hollyweird?oldid=8065"
Community content is available under CC-BY-SA unless otherwise noted.