Goggles is somewhat the second main character of Wild Grinders. He was recently Lil Rob's nerdy and geeky friend since living in Sprawl City.

Goggles is first portrayed as Lil Rob's long-lived friend, who is commonly fond of his own inventions, such as the upgraded forms of the skateboards; however, Goggles fails his inventions several times, which possibly means that they're incomplete or have technical conditions. Goggles can also be forgetful, such as forgetting to take off the lens cap, but has a loyal quality for the other Grinders. He is frequently a huge fan of Captain Grindstar, a superhero idol, but a real figure of the entire universe.

Goggles' duty is a Wild Grinder video camera man, except that he does not do well in advanced skating, prior to Swaggerless. According to Jack Knife, he is described to be the weakest member out of the team, which he is prone about his inabilities. In case of the inabilities to skate, Goggles is sometimes envious to be perfectly talented in skateboarding like his friends.

Stated in the School Daze, Goggles is the only Grinder not to be bored at school.

Note that both of his parents are voiced the same as Goggles' voice actor, Yuri Lowenthal.

Goggles wears a green sweatshirt, brown pants, and blue-white tennis shoes. He also wears a blue knit cap and a pair of big glasses. Goggles can carry his large-sized backpack in several of episodes.

In Going Hollyweird, which Goggles betrayed Lil Rob, Goggles sports sunglasses and a orange sweatshirt. He keeps his knit hat. This is the temporary appearance in this episode.

In Swaggerless, Goggles wears Stubford's original clothes as he tries to bring Lil Rob's memory back.

When Lil Rob travels to another dimension in A World Gone Rad-Awesome, Goggles has his opposite self as goofy and dull. The opposite form appears as the same clothing as the real Goggles always wears, but he can pick his nose with one or two fingers. Combining with Jay Jay in an unbalanced time, it takes Jay Jay's body and Goggles' backpack, knit cap, and glasses.

Goggles, with his camera, waving directly to the viewers. 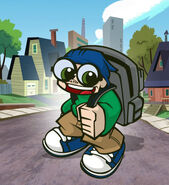 Goggles himself with his camera. 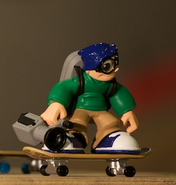