Freddie is the minor character of the Wild Grinders TV series.

Gaining much strength and pride, Freddie works in a taco truck as a seller. He is always targeted by Denise, whom seems to have a crush on him.

Freddie's facial features include a handful of acne around his mouth, short hair with a dark brown hue, informally pale forest green eyes, gray earrings, and braces. He always dons his black-white cap backwards, but uses his helmet to skate. Freddie's vestments are a gray tank top, dark blue jeans, and gray-black tennis shoes. He has a gray watch on his left wrist and an icon that shows a taco with wheels on the center of his tank top. 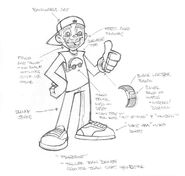