"There's no use living. Really?... Break my board! Just break my board and leave me for dead!"
―Emo Crys, Golden Grinders

"I overcome with emotion. A moment please..."
―Emo Crys, Close-Up

"I've got the Grinder spirit! My blackened soul has found a moment of joy. And now...it's gone."
―Emo Crys, Survivored

"Here are my favorite last words:I got this."
―Emo Crys, Special Delivery

Emo Crys is one of the main characters of Wild Grinders.

From the old Wild Grinders site:
Emo Crys' parents moved to Ketterville from China when he was a baby. Growing up as an outsider Emo Crys turned to drawing as a way to express his emotions. Once he found skating, he approached it the same way. It is all art to him. Emo Crys met Lil Rob at a local contest. They slammed into each other and spent the rest of the day trying to knock each other off their boards. After the contest they apologized and Emo Crys became part of Lil Rob’s skate crew, the Wild Grinders.

Emo Crys is a deep and sensitive boy, who often speak in his dramatic, but gloomy tone, and cares for trivial things that make him upset. As everything did not go so perfectly, he begins to whine or let out a meltdown; as for example, that his board was missing (which he does not remember that his board was imaginary). Emo Crys is always artistic of spray painting, or just regular painting, in his own schemes. Emo Crys was described to be lecherous and lovesick towards girls, particularly either girls with blonde hair or those who like his interest. Emo's central interest is unicorns, but he starts to hide it from his friends, in order not to disappoint them. Emo Crys frequently thuds his poetic advice as "irony", "romantic", "melancholy", and "death".

In Grindermania, his musical instrument was the cowbell, yet it does not fit in the Backside Grinders mode.

Emo Crys' stance is goofy and he prefers to skate on mini ramps, banked walls, and sometimes rails. His favorite music is "emotion inducing guitar-laced rock".

Emo appears as a slightly pale-skinned boy with a simple black eye color with and almond-shaped eyes. He is shown having a black peakaboo haristyle, fitting for his "emo" personality. He wears a purple, black-striped shirt and light blue jeans. He also wears a gray scarf on his neck and gray shoes. Emo Crys' skateboard is precisely violet with a few crows.

In Neptune's Chowder, Emo Crys usually wears a tank top that have the same pattern as his original shirt. He wears shorts with ripped sections on each pant and the same color as his pants. His surfboard exactly has the same paterns as his skateboard.

In the second half of the Halloween special, Scream a Little Scream, Emo Crys' costume can be typically a fortune teller. Emo Crys has a red turban wrapped around on his head, and also wears a purple torso with a yellow collar with purple crescents in each. He usually keeps the scarf around his neck.

After Emo Crys was possessed by the Flaming Skull's ability, Emo Crys was a vampire. His skin was colored as pale blue and have fangs on his teeth (not noticing that they are fake one). Emo has a grey vest and a white shirt inside, contains a black-red cape around his neck. There was brown pacthes over his mouth, sleeves, and his grey scarf.

When Lil Rob travels to another dimension in A World Gone Rad-Awesome, Emo Crys' has his opposite self as joyful and jolly. The opposite form has his peakaboo hairstyle missing and his right eye revealed fully. When morphed by Meaty, it takes Meaty's head and Emo Crys' full body.

The first merchandise appearance is known that Emo Crys wears a black shirt, mahogany scarf, and black pants. His shoes are white with black sections and soles.

Emo Crys is shown wearing a black tuxedo, along with a purple scarf. His shoes are purple, while the sections and soles are fully black.

Emo Crys' relatives were not mentioned or shown in any of the episodes.

Early description shows that Emo Crys develops a central friendship with Lil Rob when they first met in a local contest at Sprawl City. However in the official series, similar to Jay Jay's, Emo Crys' status of "Lil Rob's best friend" is replaced with Goggles'.

A few vague frames of few episodes recognized that Emo Crys developed a small crush on Flipz; despite of forming love interests, Flipz does not show any romance reactions of Emo.

Emo's temporary interest in Emo's Mystery Girl. Despite of Denise's spitefulness of the Wild Grinders, Denise and Emo share the same interest of unicorns, but she becomes over-ruling at him and becomes picky.

Emo Crys skates on a rail

Many of Emo Crys's faces in profiles 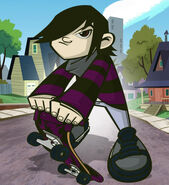 Emo Crys in his Hank the Happy Hamster outfit

Emo Crys in "Wild in the Street"

"That what a girl told me online...(NERVOUSLY)hee hee hee..."

Emo Crys has his Artist ID as seen in Biggest Sellout

"If we need to find our friends, we need to...(DRAMATIC)contact the dead!" 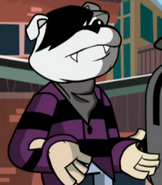 Emo Crys, along with the Grinders, as elves (Gary's Little Helpers)

Crying Emo Crys
Add a photo to this gallery 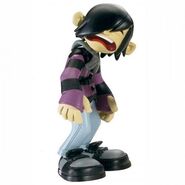 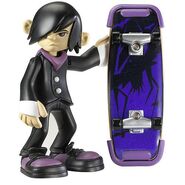 Emo Crys with a tuxedo 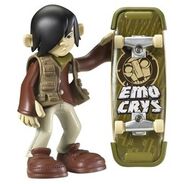