Deconstructed is the first half of the "pilot" episode on Wild Grinders first season. It was first released on September 26, 2011 before officially aired on Nicktoons on April 27, 2012.

While the Grinders were playing around with the girders controlled by Goggles' remote, Meaty's drool plunges on it, causing the girders to malfunction. The Grinders stumbled upon a billboard that advertises an amusement park to be constructed at Sprawl City, much to their awe and amazement. At Lil Rob's house, the group inputted their footage on the computer, only to find out that there are random footages taken by the head camera Meaty wore.

Meanwhile, Lil Rob and the Grinders found out that their beloved skating area was going to be reconstructed as a giant amusement park, thanks to the help of Stubford Hucksterball and his assistant Officer Lackowski. Stubford's father, Track Hucksterball, created the concept of his own theme park called "Waiting World". The Grinders find alternative areas to skate on, but with no luck. Lil Rob visits his father, Gene, at work to explain the loss of his crew's skating area.

The Grinders plan to chain themselves on board by a moving tractor to stop Track Hucksterball's progress. Gene and Track halted the kids in an attention. Gene questions Track Hucksterball about the kids in chains, only to reveal that he is working with him to build an amusement and replacing the crew's skate spot. Track locked the kids and Meaty at a cage; Gene pleaded that he cannot let his son be locked up, but Track convicted that he will make the theme park and forget his son, or he will be fired.

Lil Rob escaped the cage, and skated through an abandoned house. Track congratulates Lil Rob, but Stubford vowed that he could be a better skater than him, but fails. Lil Rob recommended Track Hucksterball that he will make a theme park somewhere else, other than building it on their skate spot. In a second thought, Track builds a supermall, while the Grinders finally saved their spot. Meaty passes gas and disgusted the Grinders, ending the episode in a sour note.

Jack Knife as he is picking his nose.
Add a photo to this gallery

Jack Knife, when did you get these black wheels from? 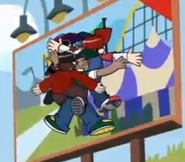 Clearly, a billboard with a caption and a reflection.

Emo Crys' left peekaboo?
Add a photo to this gallery
Retrieved from "https://wildgrinders.fandom.com/wiki/Deconstructed?oldid=8079"
Community content is available under CC-BY-SA unless otherwise noted.