Chris is one of the minor characters of the Wild Grinders series.

Chris is acceptably new in Sprawl City, but carries his strange looks as a half-human, half-werewolf. He is quick to become a friend with Meaty, until Lil Rob thinks that Chris is going to maul him. After Rob's proof of Chris is destroyed, Chris does not transform himself into a werewolf, just remaining his regular self.

Chris was raised by coyote parents.

Chris seems to be identical as his voice actor with the same name, which he have facial features, consisting of black, short hair, his bangs that touch close to his chin, and periwinkle eyes. He sports a dark grey T-shirt that have brittle edges in each sleeve and bottom, and has his signature symbol at the center, as a wolf. Chris dons a black wristband on his right wrist, while he wears a pair of jeans that have knee sections torn apart and gray tennis shoes. While he is skating, Chris sports a helmet with the identical color as his clothing. The profile notes that he is roughly the same height as Jay Jay. 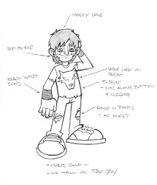